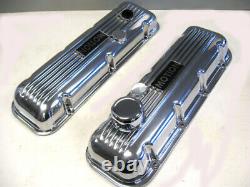 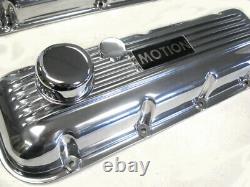 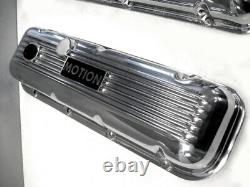 1965-73 CHEVY BALDWIN MOTION EMBOSSED VALVE COVERS PAIR RARE BIG BLOCK NEW. Why would you want to advertise that a motor was built by Yenko, Baldwin Motion, or Nickey. Like most of us who bought a car we took off the cheesie decal they put on the trunk lid or license plate frame for advertisement. We didnt want to advertise for them. 35 years later we cannot get enough of it. If only I knew what I did today 35 years ago I would own a lot more rare stuff. These covers fit all big block 396, 427, 402, or 454 motors. They are aluminum and I have cleaned and polished them up because some oxidation has occurred over the years. They look very nice, in new condition. I just installed a set on my 69 Camaro with a ZL1 motor, as shown in the picture. NOTE: All valve covers are new with some light oxidation. I have spent just a little time with some chrome polish. A little extra time will make them look almost like chrome. Do not be fooled with cheap Cal Custom or Micky Thompson valve covers.

You can use most roller rockers and the cover will clear. The "MOTION" is not a decal! When I say embossed, I mean the aluminum is cut away and MOTION is raised up from the valve cover.

This item is in the category "eBay Motors\Parts & Accessories\Car & Truck Parts & Accessories\Engines & Engine Parts\Valvetrain Components\Rocker & Valve Covers". The seller is "joparts" and is located in Geneva, Illinois. This item can be shipped worldwide.